I`ve been dashing about between thunder storms today. I don`t mind them when I`m indoors but I don`t like having to be out in one.

A vivid flash of lightning woke me in the early hours of this morning, I got out of bed, wandered down stairs and unplugged the television aerial from its socket. (We`ve always done it, so I thought I`d better, but I don`t know if it really matters?) Do other people do it, I wondered as I made my way back upstairs. Pulling the duvet back over me, I dritfted back to sleep.

Getting ready for work this morning, I noticed the sky getting darker and darker, and spots of rain began to fall. Fortunately the heaviest of the rain held off and I got to my office without getting very wet. I`d not been there long when thunder could be heard, then the electric went off, luckily only for a minute or two, and repeated going off and on two or three more times. A bit later looking out of my window to the left the rain was pouring down and the sky was dark, but looking to the right, although it was raining, the sun was shining! How strange that seemed. I looked for a rainbow, but didn`t see one.

By the time I finished work two hours later, the sun was out and the rain had stopped. I went and purchased flowers I needed to do an arrangement at church this afternoon, I`d no sooner got into the car with the flowers and it poured with rain again.

I`ll have an early dinner I thought when I got home (rain had stopped again), so got the deep fry out and cooked my fish and chips, did the washing up, looked out of the window and clouds were blackning yet again. Quickly I loaded my bits and pieces into the car, got held up with a bit of traffic, then had to stop to post some letters, and by the time I got to the church it was chucking it down with rain. So there I sat outside the church waiting for it to ease.

The rain seemed to lessen a bit, so I grabbed some of my things, leaving the flowers in the car as I couldn`t carry everything at once. No sooner had I got inside the church door than it lightned and thundered and the rain fell down again. No way was I going outside in that to get the flowers in!

Going into the worship area of the building, the storm didn`t sound so bad. Infact there was somehow a comforting feeling about being in there with the storm raging outside. Lines of hymns about storms and God`s protection came to my mind as I stood there. Like "the storm may roar about me, ........ but God is round about me....." And I seemed to feel that protection as I stood there.

Eventually I managed to get my flowers in, did the arrangement, and... got home in the dry

And, here is the finished flower arrangement. 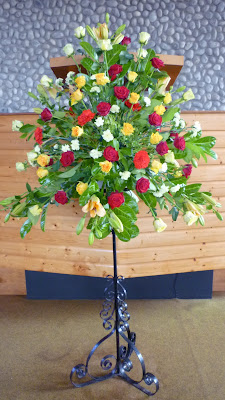 Your day seemed pretty (wet) bad until the end, and then it seemed perfect, what a beautiful way to spend time during a storm. Love, love, love the flowers!

btw eija and I are resurrecting into the bible. http://intothebible.wordpress.com/

We'll look at 1 Thessalonians from Monday on.

care to join us?

Thanks Lorna, I look forward to joining you again on "Into the Bible"

You did that? Wow, you really are skilled!