Are you any good at mind reading?

The Magic Gopher certainly is. Have a look at this , which I was sent by a friend the other day, Try it - it`s quite amazing! How it`s done, I haven`t a clue!
Posted by Ivy at 9:42 pm No comments:

I came downstairs yesterday morning, to find that my little Goldie had died. It was sad, yet I guess the kindest thing for him, as he was obviously suffering so much in the last few days.

I gently lifted him and placed him in a tissue lined container, and he will be buried in our back garden, by our helpful gardener when he comes next week. Then I thoroughly cleaned the cage and disinfected it.

In the afternoon, my parent and I just went to "look" in a nearby garden centre`s pet section..... and ... there were three canaries for sale, so .... there is now a new inhabitant here!

I haven`t decided on a name yet - he`s a nice bright yellow, but has one dark brown wing and a few patches of dark coloured feathers on him. He`s very cute. Yes.. it is a "he". We asked at the shop if they were hen or cock birds, and the assistant said she thought this one was a cock as they thought they`d heard him singing a few notes. She was right. He seemed to settle quickly into his new home, and even sang me a few notes so I look forward to hearing a lot more song from him. Just need to decide on what to call him. It needs to be a different name to any we`ve had before, because Mum says it`s supposed to be unlucky to use the same name twice.

When he`s more settled and used to being here, I`ll try and post a photo of him.
Posted by Ivy at 8:05 am 1 comment:

What colour are you today?

Not literally your skin!..... what colour are you wearing?

Looking out of the office window several times this week, for want of something better to do!, I noticed something. They were mostly grey dull days, and even on the odd sunny day 99.9% of the people I saw passing were all wearing black or very dark coloured clothes. It almost seemed to be a uniform - black coats, black trousers, black jackets, black umbrellas carried, black... (no I`m not in the city, just an ordinary town). A very few had dark brown or dark grey on. Not one bright colour did I see. It looked very depressing - and set me thinking.....

....Why don`t we wear bright or light coloured clothes in winter? It would do so much to cheer up dull days and lift everyone`s spirits.

It`s obvious by looking at him that my little bird isn`t well. It`s so frustrating, worrying and sad, that he can`t tell me what`s wrong with him. He is still eating and drinking, so I suppose that is a good sign, but he`s definitely not himself. He just sits all fluffed out, and sleeping a lot. And, now he`s finding it difficult to jump onto his perches, he seems to miss them. I wonder if his eyesight is giving him a problem. - but I`ve never seen a bird with glasses on yet!

When he is awake, he keeps looking at me, as if to say please do something to help me, to make me better. But I don`t know what. I did get a bottle of bird tonic from the pet shop and have been adding that to his water, but so far, it doesn`t seem to have had much effect.

Perhaps I shall know more tomorrow. I called a neighbour in to see him this afternoon (he used to breed canaries), but Goldie was asleep when he came, so he`s going to pop back tomorrow and have a look at him for me.

I`ve infact been dreading coming down in the mornings, as to whether I would find him still alive or not. I do hope he recovers from whatever it is that is wrong. He`s only about a year old.
Posted by Ivy at 6:54 pm 4 comments: 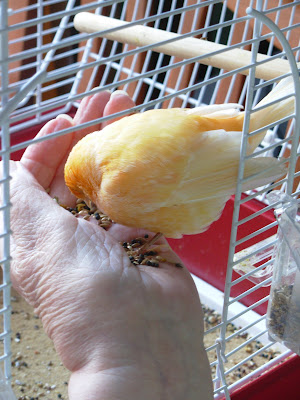 I`m so thrilled that my little bird, has now got enough trust of us, to now jump on our hand to feed.
My mum was here for the day today, so I got here to try it, and he straight away jumped on her hand too, ..... so I dashed and got my camera. This second picture isn`t quite so clear as he moved his head as I took it, but I think it`s worth posting. 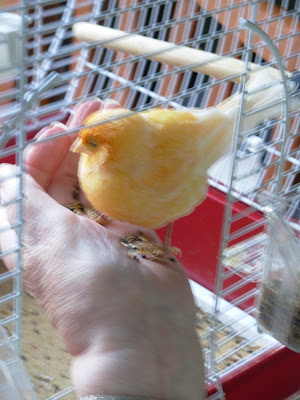 Why is it, that when I put items in the washing machine all the right way out, that they all come out inside out?

And, yet if I put them in inside out, they still come out inside out!

Have I got a mischevious little goblin in my machine?!
Posted by Ivy at 7:45 am 2 comments:

I managed to achieve something yesterday, that I`ve been trying for quite a while, so I felt really chuffed about it.

No, it wasn`t me that had to pluck up courage to do something it, it was my little bird.

For a few weeks I`ve been trying to get him to sit on my hand to eat some treat seed. Now, this is something that he really likes, and although he`s been tempted to try, and has taken the odd seed or two off my hand by stretching his neck out as far as it will go, yesterday, he actually ended up sitting on my hand to eat it, and stayed there for several minutes as he tucked in.

It was such a thrilling feeling.
Posted by Ivy at 7:00 am 1 comment:

Driving along to spend a day with some friend today, I got caught up in a line of slow moving traffic behind a farm vehicle on the road. At first this caused me a slight annoyance as I wanted to be getting to my destination. But as I trundled along thinking, well, I guess he`s got work to do and I shouldn`t really mind, I glanced idlely into the field on my left.

Then I looked again, as something caught my eye. There, standing amongst the green of the crop was a small deer. The first time I had seen one in the wild like that.

How glad I was that the farm vehicle had made me go slowly by! At normal speed of the road I wouldn`t have seen it.
Posted by Ivy at 9:51 pm 1 comment:

I wish a Happy, Healthy and Peaceful New Year to all readers.

Having reflected yesterday on the year just ending, I`ll share some thoughts today of some of the things I want to aim to do in this new year.

Are they resolutions? No, I wouldn`t call them that, - infact I heard on the radio today that its bad for your health to make New Year Resolutions!!!