Coming out of the butchers and going to the Post office this morning, I became aware of a strange sound in the town.

It was a sort of metalic clanking sound.

I walked further along to the greengrocers and the sound became louder.   It was like the sound of the clanging of a herd of cows with cowbells on them.

People were standing and looking up the road, trying to identify what the sound was.  It appeared to be getting closer.  Then we could see a group of people walking down the centre of the road, all dressed in colourful costumes and ringing large bells as they came. 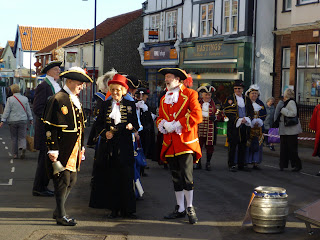 It turned out that there was a Town Crier competition in the centre of the High Street, and town criers from across the country had come to take part in it. 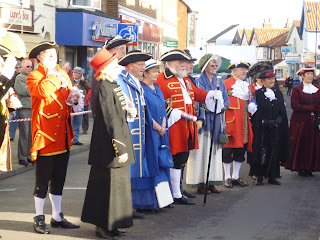 Very colourful they all looked in their outfits on the sunny morning.
Posted by Ivy at 10:03 pm No comments:

The workman- two of them and a young lad, came in carrying a big bag of tools and a new extractor fan to fit in the kitchen window.   Now, I should add that it was early evening when they came, so dark outside.
Looking at the fan they said that they just needed to unscrew the fittings on the current one and then put the new one in,  wouldn`t take long.   One strapped a light to his head and went outside to hold the outside part of the old fan.

They got the screws out, but, the fan wouldn`t lift off of the window.  We just need to cut the seal all around it then it will be free to lift out I heard them saying.   So they did that.  The chap outside was trying to pull his side off, and the ones inside were doing the same, but, the fan still wouldn`t budge.   So next they tried dismantling more of it.    I went off into the other room and left them to it.  I could hear them knocking and banging away at it.

A while later one of them came through to me,  "We`ve a problem, a little mishap - but it`s nothing to worry about" he said.  "the glass has cracked around where we`re trying to get the fan out".   We`ve found that whoever put the fan in, didn`t do it right - they`ve completely stuck it to the window with strong sealer, and we can`t get it off.   So, I went throught with him to see.

He showed me the cracks (actually not quite as bad as I expected).  "We`ve got to get a new pane of glass for it -then it will be easy to put the new one in.   It won`t be your expense" he said.

"How long will that take", I asked, and was told 3 or 4 days, but we`ll block the fan blades etc all up so that you don`t get any draught in he said.   Then spotting that I`d got an extractor over the cooker, they asked if I really wanted a fan in the window, or just a plain window.    Now, to be honest, I`ve never liked that big monstrosity in the window - so I jumped at the chance of having the window replaced with a plain piece of glass.

I`ve just realised how long it is since I wrote anything.     I suppose that shows what a plain ordinary life I lead, that I``ve not been inspired and haven`t found anything interesting to write about.

I don`t really know if this is interesting - but - here goes....

My kitchen window has one of those big square extractor fans in it.  Through, I suppose the wear and passing of time since it was put in, I noticed that one and then two of the outside flaps which should close the aperture when not being used, had fallen off.   During the summer this didn`t matter so much, but with the cold winds of recently my kitchen was becoming colder than inside my fridge!    So, when the builder was doing the outside of my house several weeks back, I mentioned it to him, and he said he could get one of his electricians to sort it for me.

Weeks went by, I rang and reminded him 3 or 4 weeks ago.  He said he hadn`t forgotten and that he`d get the chap to come when he was in the town again.   Fine.   My boss popping in with some work and a cup of tea the one day last week came into the kitchen and immediately said "it`s cold in  here!  where`s the draught coming from?"   I explained what and why.   So he straight away got out his mobile phone and rang the builder (who he knew).   What happened? - the workmen came last night!
Posted by Ivy at 7:17 am 1 comment:

What the postman brought

Opening one of the envelopes in the mail the postman had put through my letter box yesterday I came across this from the insurance company which deals with my car insurance -  headed Birthday Offer, (although it`s not my birthday for another 48 days) I thought, Oh, what are they going to give me or treat me to.

"Birthday Offer.
Dear Ms............
We understand how, with time life insurance becomes more expensive and difficult to get.  So we`re delighted to offer you an easy opportunity to get more value for money, provided you apply before your 57th. birthday.      ....it can provide your loved ones with a guaranteed cash sum on your death from any cause........"

I felt quite depressed by the time I`d finished reading it all - not because they weren`t actually giving me a birthday gift, but (although I know a lot of people do unfortunately die young), I felt that to suggest that I should think about death as something for a birthday offer was unfeeling.  At my birthday, I would be thinking of celebrating and remembering happy times, not looking and thinking of what could happen in the future.

Needless to say, I shan`t be accepting their offer!
Posted by Ivy at 7:25 am 2 comments:

I have "strange" thoughts or trains of thoughts and questions at times!

Doing something with different colours yesterday, I got to thinking.....
why is the colour Red called red, or Brown  brown, why is Green called green - infact why are any of the colours called the names they are?   Why isn`t yellow called blue or blue called purple??   Who decided what colour should be named what it is?

Ok, maybe you`ll say that brown stems from an old Latin, Roman, Egyptian or some other derivative-maybe for the colour of earth - but then who decided that earth should be called earth?.... and so it goes on.......

Why is anything called what it is - who was the very first person to name them???
Posted by Ivy at 9:08 am 2 comments: