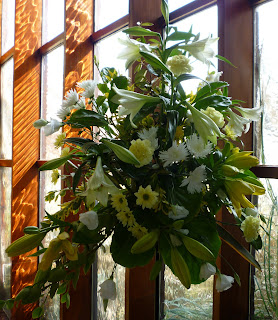 A crab on the beach

Walking along the promenade in the sunshine yesterday afternoon, I suddenly came across the most enormous crab I`d ever seen on our beach....... 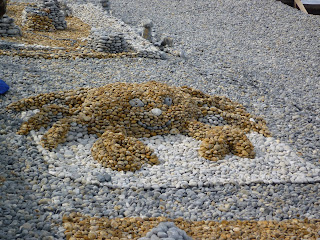 and there facing it, looking ready for action was an equally large lobster.... 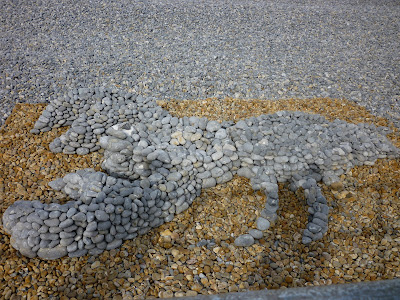 Yes, the stone artist had been at work again, piling up beach stones to make these wonderful sculptures using just the beach stones artistically gathered and stacked, with nothing else to hold them in place.   Just using the uniqueness of each stone`s shape and colour to form these art works.

Isn`t that a bit like how God, can use us? - all individual and different yet all having a place in his world for his purpose
Posted by Ivy at 10:07 pm 3 comments:

A Cross in the Sky

Opening my curtains this morning, I looked up at the beautiful blue sky, and there saw a Cross.

It seemed to be saying to me, God is with you, he is all around you. 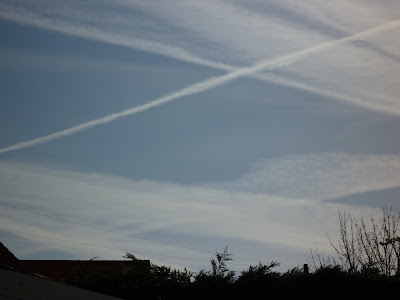 So I just had to grab up my camera, run out into the garden (yes still in my dressing gown - what any neighbours thought if they saw me I don`t know!) and take some pictures of it to share. 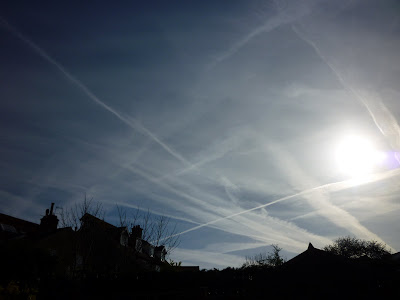 I`ve just got out of the shower, and whilst I was towelling myself dry I noticed a black mark on the pink towel I was using. How did that get there I wondered and what was it.

At first glance it looked like an ink spot. But I`d not had ink or paint in the bathroom, I`d not used marker pens there for anything. What was it? Where had it come from? Looking closer, I discovered that it was a spider! It was nestling among the fluffy fibres of the towel. And I can`t bear spiders! To think that I`d had that towel wrapped all around me and been rubbing myself dry with it, with the spider that near to me...ugghhhhh.

Eeek!... still perhaps it`s dead I thought, but on a closer look from a distance I saw it`s legs move. What to do?.... I tried shaking the towel in the shower away from me to try and dislodge and get rid of it, but no it wouldn`t fall off. I couldn`t touch it.

In the end I dropped the towel into the shower tray and got the hand towel from the rail to finish drying on. The bath towel with spider will have to go in the washing machine as it is, and hopefully that will get rid of the beastie.

What a start to a Sunday morning!
Posted by Ivy at 8:46 am 2 comments: