No, I`ve not moved, I`ve just had my hall, staircase and landing redecorated and a bit of dismantling done.

Our staircase when I was a child had bannisters, and I have memories of sitting on the stairs, with all my dolls and teddy on different stairs, when my mother was hoovering in the hall, and pretending we were in a train looking out of the gaps in the bannisters as the windows, the sound of the hoover being the engine
.
Anyway - during the 1960`s my mother decided she was tired of keep having to dust all the fiddly fancy bannister posts and rails and we had a handiman come and box the whole thing in with sheets of hardboard and then it was painted.   Looked very solid, and I didn`t like it.

So, now having the house to myself, I decided it was time those awful sheets of hardboard came off.  And what a difference it`s made to the the house.   It`s given it a whole new feel and made it seem so much bigger, brighter and lighter as one comes in the front door. 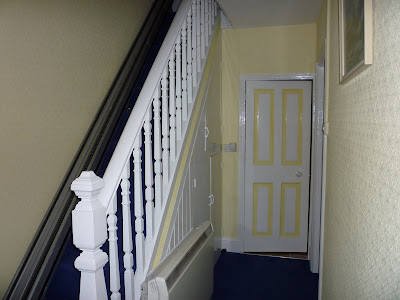 What`s in an empty office?

Well, it was back to work yesterday after my weeks holiday.   Work wasn`t bad, but at one point in the morning I got a real fright!

Running out of staples I went upstairs to the office at the back of the building, which had been vacated some time ago and left empty, as I knew there were unneeded stationery items there.   I easily found what I wanted and returned down to my own office and continued working.

Later in the morning, needing to find an old personnel file, I again went up to the next floor, but this time to the unused office at the front of the building.   On opening the door something large whirred around me, making me jump.  (this office too had been unused for months and just occasionally I had need to enter it).  Once I got over being startled, I looked around and there was a pigeon.

I quickly shut the door so that it didn`t get loose in the whole of the building,  thankful that I like birds and am not afraid of them flying round in the way that many people are.  How had it got there?   Looking across at the window, which had roller blinds pulled right down to the window sill and quite tight against the window, I spotted that one of the sash windows was open about 12 inches from the top.  Obviously that was how the bird had got in, but yet, the blinds were close to the window, so quite how he (or she) had managed it I`m not sure.

It was obvious from the state of the "little messages!" that the bird had been leaving all over the chairs, desk, filing cabinet, floor etc., that it had been in the for quite some time.   Poor little thing!

By now the bird had quietened down and was sitting perched on the edge of the filing cabinet watching me,  I went over to the window and pulled up the blind of the opened window.   After a minute or so the bird flew and perched on the top of the open window beside me then with a flap of its wings sped off out into the world again.   I wonder what tales he/she will tell the other pigeons of its adventure.

I`m just so glad that I had reason to go up into that room.   I`ll now make sure I check up there more often - just incase it decides to come back.
Posted by Ivy at 8:01 pm 3 comments:

In the Bird House

What do you expect to find in a bird house?

......look again at this one which I saw the other day 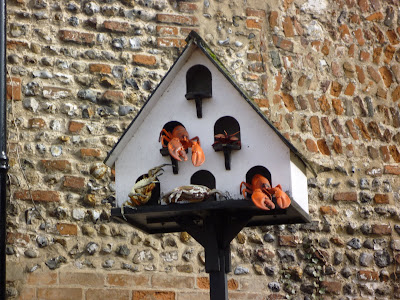 I took so many photos of the snowdrops on my walk that I thought I`d share a few more with you all.   To me they are such a beautiful flower and one of my favourites.   I marvel at the way something so small and fragile looking can struggle through the earth at this time of year and withstand the cold, frost and all that the climate gives it at this time of year. 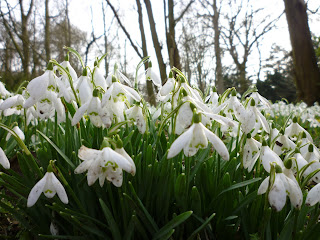 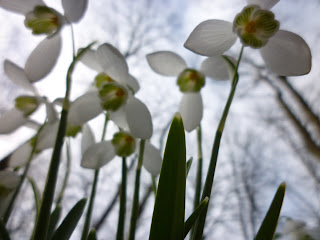 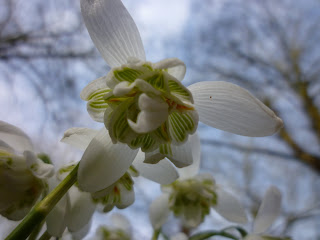 Looking closely at the snowdrops, there were many different kinds too- like this one with the lovely green petals and shading, which one couldn`t see unless you gently lifted its head - or as in this case, put the camera underneath it! 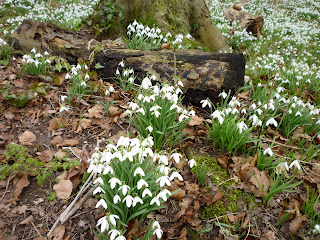 This to me was a good sign of new life among the old, with the fallen and decaying tree trunk and the fresh new snowdrops.   So encouraging, so hopeful.
Posted by Ivy at 8:11 am 3 comments:

A Walk in Springtime

Come, enjoy the walk that I enjoyed on Friday afternoon..... 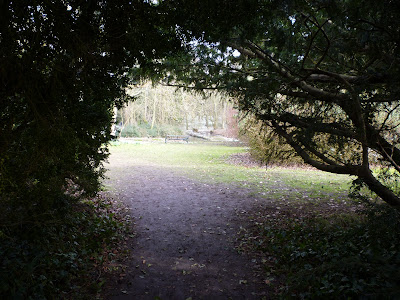 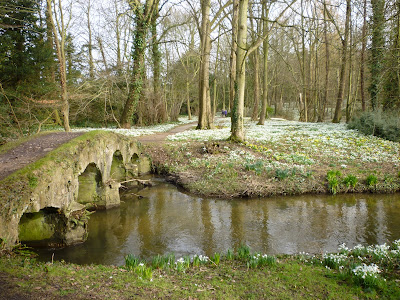 No, that`s not snow on the ground, its a carpet of snowdrops 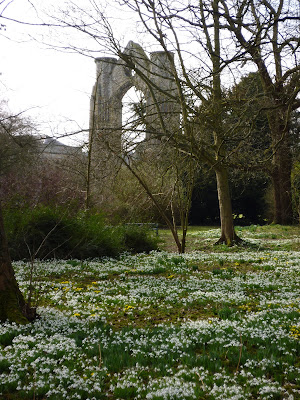 Amongst the snowdrops were some yellow aconites 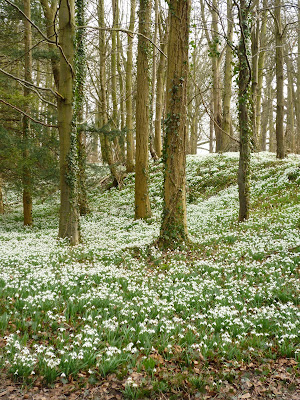 Everywhere I looked there were the dainty white snowdrops, hundreds of thousands of beautiful blooms 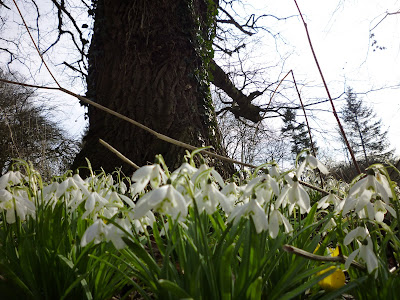 The sun was out and it was a really beautiful peaceful afternoon
Posted by Ivy at 8:13 pm 3 comments: