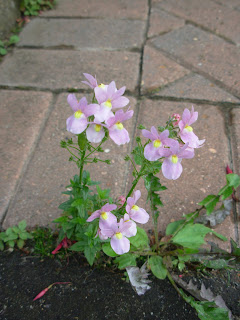 I promised a few days ago that I would show you a view from my window. Well, here it it....

Not exactly a view, but something I spotted from the window and then went out to have a closer look at. How this plant came to be there I do not know. It it growing completely out of the paving in my drive.

What plant it is, I do not know either, but it is so dainty and pretty that I just had to try and take a photo of it. So opening the front door a crack I peered out to see if anyone was around, and seeing no-one was I took out my camera, walked to the edge of the drive by the pavement and got down almost on my hands and knees to try and capture a picture of this beautiful little flower. If anyone had seen me I`m sure they`d think what a mad woman I must be!

And, it`s still flowering even after about 4 or 5 weeks. And, as wonderful is the fact that no-one has trodden on it, postmen, dustmen (sorry - waste disposal operatives, I suppose I should call them?) and anyone else who has been to the house.

What an emblem of delicate strength.


(if you click on the picture it will come up larger)
Posted by Ivy at 8:57 am 2 comments:

By this time today there should have been a flurry of activity going on in the house, of last minute jobs as we (or I should say I!) packed the car with cases, coats, bags and all the paraphernalia for going off on holiday, checked that windows were shut, rubbish put out and all the hundred and one jobs one does before such an event.

The sun`s shining and it looks the perfect morning for a long drive to the South Coast.

For as long as I can remember from a child, we`ve always gone on holiday the first week in September/or first week after the Bank Holiday Monday. And we`d booked to go that week again this year. But, having got my Mum into a place of Housing with Care, because of the way she has become unsteady on her feet, I just dare`t take the risk of taking her away on holiday on my own. So, I cancelled the holiday. I know I could perhaps have gone on my own, but it didn`t seem fair to do that. So, I`ve cancelled it at work too, and will take a week later in the year.

But seeing the sun and beautiful morning that it is today....... no, I must stop thinking along those lines....

I have, however, "treated" myself to something else.... but more about that next week!
Posted by Ivy at 8:39 am 2 comments:

If three thousand, three hundred and thirty three is the answer, what was the question?

I remember as a youngster looking at our canary and asking my parent "How many feathers does it have?" and that was her answer. Now, whether that was the true answer of just her guess at it, or her answer to stop me asking more questions, I don`t know.

But, having just had our newest canary go through his first moult, I seem to think she might have been right! There have been feathers flying for weeks. From the large long wing and tail feathers (yes, he looked quite cute even without a tail for a few days until it quickly grew again) to cute tiny soft curly ones. As soon as I`d hoovered them up, there were more on the carpet. And, ofcourse he stopped singing while he was moulting. And it has gone on for weeks.

Now, yesterday evening, after having a flap of wings and little fly round in his cage, he started tweeting in a different tone, as if finding his voice, and then started to give a few little trills. I was thrilled to hear that again, I`d begun to think he wasn`t going to sing again. Hopefully now he`ll soon be back to full song - a beautiful sound.

What wonderful creatures birds are.
Posted by Ivy at 7:03 am 1 comment:

It`s Bank Holiday Monday..... and.... the sun`s shining! Quite unusual isn`t it?! And this year for the first time ever, I`ve not had to work on the last three bank holiday Mondays. So, I`m off out for a while shortly, and then will probably enjoy the luxury of sitting in the garden with a good book this afternoon for an hour or so.

What a lovely feeling to have a whole free day stretching ahead of me. So I`m not going to spend any more time at the lap-top now, I`m off!!!!
Posted by Ivy at 8:45 am 4 comments:

So, Team GB has won some gold medals at the 2008 Olympics - what good really is that to any of us? Or to the starving, homeless and sick people of the world?

It makes me so mad, to hear of the millions of pounds being spent on training a few individuals so that they can run, swim, cycle or whatever just to get a medal for themselves, ok, so it`s for their country you might say - but what actual good does it do their country?

And that`s without the millions, about £900m I`ve just read, that this country is planning it will cost to host the 2012 games. Just think how much suffering in the world that could alleviate. And, why suddenly can a government find this sort of money to waste on this, yet not find money to support the Health service, education and basis necessities of people.

It`s certainly a mad, crazy world and times that we are living in.
Posted by Ivy at 6:57 am No comments:

Back - but for how long?

I can`t work this out. My connection which had been down for several days suddenly came back on again on Friday. Well, I say normally - I`d unplugged everything (as instructed when I rang the ISP provider the previous week) dozens of time, left it unplugged, reconnected all the leads into their various sockets at least once, and usually more times than that, every day all with nothing happening.

Then having unplugged it and left it unplugged all Thursday night, on Friday morning I plugged it in yet again..... and it worked. I`m still waiting though for the MAC code which I requested from my supplier last Monday Three to five working days they said. I make it over that now. So I think another phone call is called for tonight.

I haven`t had time to blog though until this morning. I had a guest to entertain on Sunday, so Saturday was spent trying to get the house a bit tidier. Having moved furniture out to my parent`s new place the other week, I`ve still got piles of items that came out of the drawers, desk etc.... all stood about waiting to be found homes.
Then last night I had a lovely suprise visit from another friend who`s moved nearer to here. So, it`s been a good weekend for me.
Posted by Ivy at 7:02 am 1 comment:

Well, I can`t after all show you what`s out of my window - that will have to wait for another day. My connection at home went down again yesterday. I think maybe I should change Provider? I`m getting fed up with it constantanly cutting out on me.

What can I see?

I came across this while trying to think what to write....

Cartoon by Dave Walker. Find more cartoons you can freely re-use on your blog at We Blog Cartoons.

I might show you what I saw from the window, tomorrow!
Posted by Ivy at 11:09 pm No comments:

After receiving the new plug and lead, to try and get me back on line, I dutifully plugged it all in and waited expectantly...... nothing.

So, another phone call to the ISP company. After a half hour on the phone, unplugging USB lead, ethenet lead, connecting them the opposite way to what they had been (not that they were wrong because they`d worked that way for years!), pressing this key and that key and still nothing working, the phone cut me off! (I looked at the time I`d been on it for 30 minutes and got nowhere)

I dialled the number again, went through all the "Press 1 for...." "press 4 for...." "press....." "press...." until I got a human being!. Then had to give all the details again. Got told to do exactly the same things as the previous person had told me..... I said I`ve already done that several times before I got cut off a few minutes ago. Just do it again, so that we can go through the whole process... I was told. So I obeyed. Still the red light flashed quickly and nothing happened. "I`ll have to go and ask someone else" said the voice at the other end. The phone went quiet.

Whilst waiting for her, I noticed that the light had now changed and become steady on the Livebox, so I thought I`ll just try clicking to open my emails..... and..... it worked. I tried one or two other web sites, all ok. So, waiting another few minutes and the `Voice` hadn`t come back, I put the phone down. That was another 20 minute phone call.

Incase anyone wonders where I`ve got to.... I`m still here, but, I lost my internet connection on Friday night and still haven`t got it back.

It just cut off suddenly about 9 p.m, and I thought, oh, well it will be back in the morning - but Saturday it wasn`t. I had a lot to do that day, so didn`t bother, just thinking there was a problem with the ISP provider or that they were updating systems or whatever they say they do from time to time. But, when by Sunday evening it wasn`t back, I began to get both annoyed and frustrated. So, I rang them. They told me to do, what I`d already tried doing (but I didn`t tell them that, I dutifully did as I was told), unplugged the Livebox and then reconnected it... but nothing except still the quick flashing red light, which shouldn`t be quickly flashing.

So, he said, it must be to do with (and I can`t remember what he called it - not being techincally minded in that way). I`ll send you a new one out. The plug thing arrived today, and at lunch time I quickly plugged it in..... and waited expectantly.......and......... still the red light flashed quickly and nothing connected. I hadn`t time then to fiddle around with it, but will tonight. But I suspect that it`s going to mean another phone call, because I don`t think that`s going to solve the problem. grrrrrrrrr.

I got permission from one of my bosses to use the work computer after I finished my work, so that I could so some church work that I needed, and so as I`ve time to spare I`m updating you on what`s happened.

I didn`t realise how much I used the Internet, until I hadn`t got it!
Posted by Ivy at 4:48 pm 3 comments: