Yesterday evening, being a nice sunny evening, I took my Mother for a ride to Blakeney, to sit by the water there for a while.

As we approached the quay, I said to her `I think the tide`s going to be in` as I could see as we went down the narrow hill into the village the water in the distance, which last night looked to be have something disticitively different about the view.    (Usually the tide nearly always seems to be out whenever we go there).   As we reached the car park, it was still quite full of cars, and driving on we could see why - the tide was in, and very high, but we managed to find just one parking space left away from the water`s edge.

I got my camera and got out of the car to take some pictures of the sights before us. 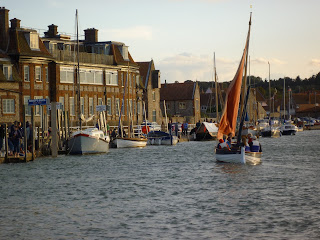 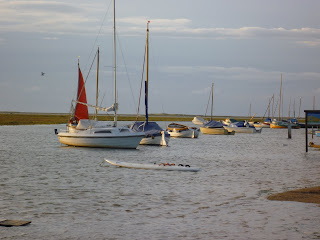 And, along with the vessels normally in the water was...... 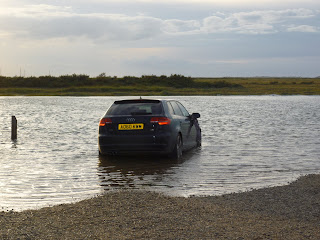 Obviously parked too near the tideline when the tide was out, and the occupants gone off for a walk.  Quite a crowd of people gathered watching it as the tide continued to edge higher
. 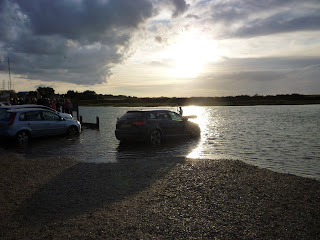 A week today I`ll be heading off for a holiday in North Yorkshire.   The first holiday I`ve had away for three and a half years.

But.... before that, I`ve got to pluck up the courage to tell my Mother that I`m going away.

I didn`t tell her when I booked it months ago, as I know she`d try to put all kinds of obstacles in the way and get wound up and worried.    I know she`ll still do that, but at least for a lot less time, only 7 day instead of weeks and weeks.   She always imagines that something is going to happen to me, like an accident if I`m driving anywhere (not that I`m a careless driver, but it`s all the others on the road she says! yet she loves getting the car and going out with me).
I`m sure it`s more a case that she`s thinking of herself and what she`s do if anything did happen to me, she keeps saying I`m all she`s got.   Which is so possessive and selfish.  Where she lives she has carers on hand 24 hours a day so she`s well looked after.

I`ve never found it easy to tell my mother anything, and I`ve been trying to analyse why.   It makes me now wonder if I`m actually afraid of her, and always have been in some way.  Not that she`ll physically hurt me, although as a child she was the one who would hit me at times if she thought I`d done something wrong, I can never remember my Dad hitting me.

I know envy is wrong, but I do so envy those daughters who have such a good relationship with their mums.  I`ve never had that.

So, wish me luck as I pluck up courage today, or tomorrow, or the next day......

At last I`ve got my first Harvest of the year.   As I wrote in an earlier post all I`ve managed to grow this year is a really, really good crop of weeds, but yesterday my patience was rewarded and I got my first vegetables from the garden for this year...... 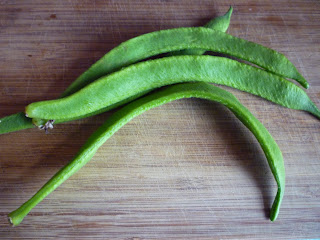 
but there are others forming on the plant - but I guess they`ll all be ready to eat on the week I go away on holiday - so I`ll miss out again.

Today was Sea Sunday at our church, and yesterday was my turn to do the flowers for the weekend, so of course out came the crab pot and net from our storage shed.

On starting to unroll the net (an authentic fishing net from years ago), in front of the pulpit, I suddenly looked down at the floor, and there marching across the carpet were a whole army of woodlice!.... they`d obviously got into the net whilst it had been in the shed.   So what to do about them before they got loose and invaded all the church, I could just picture them creeping on everyone during the service!  The quickest solution  was to stamp on them.  Anyone looking in the church must have thought I was doing a war dance!

Thankfully, I remembered that the caretaker was on the premises cleaning, so he came through with his hoover and helped me unroll the rest of the net and hoovered them all up.  I kept my eye about whilst completing the flower arrangement, and during service this evening, but thankfully didn`t spot, or feel(!) any.

Here is the arrangement, I don`t think you can see any woodlice there! 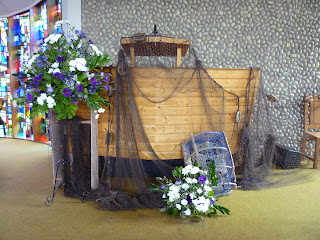 Earlier this year, full of the feeling of spring I set to work on my vegetable patch and set carrot and beetroot seeds and some onion sets, looking forward to being able to enjoy home grown produce during the summer.  A few weeks later, there were tiny green seedlings beginning to appear.  Something I always marvel to see.   As the weeks went on I realised that the tiny green stems and leaves which were appearing weren`t my vegetables but were weeds.    So, a dilemna, do I pull them out and risk loosening any baby vegetable seedlings which may be starting to grow, or do I leave them until I can see what is what.    I decided to leave them.  After a few weeks still no carrots had appeared, but the beetroot had.   So I very carefully, on my hands and knees, picked out all the weeds. 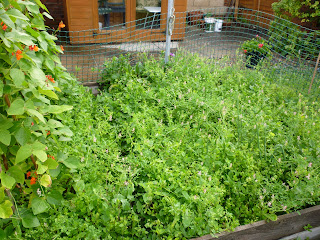 But, after a few days I looked again and the weeds were back twice as big as before, but the beetroot had got no bigger, and still no carrots, and the onion sets weren`t showing much signs of life either apart from about half a dozen of them.     I again went to work on the weeds and removed them.

After the third or fourth time of doing this, I got so disheartened that my veg weren`t growing that I gave up - so here is my veg (weed) patch!    At least the runner beans which I started off in pots and set out later seem now to be doing and have some flowers on them, so hopefully I`ll at least get a crop of them. 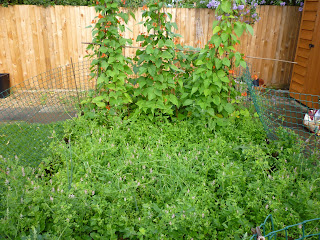 Somewhere in among there, should be a few onions and a few beetroot - anyone want to come and find them?!

The patch is fenced in to keep neighbourhood cats out, because they caused damage last year to my vegetables by scapping and leaving `little messages`, the fencing has kept them out but -  how do I keep weeds out??

I`ve a friend staying for a few days, so I did a batch of baking on Saturday, something I`ve not done for quite a while. But I found myself really enjoying getting into it again.  I made some sultana scones, a cherry cake and an apple pie, the apple pie we had for lunch yesterday.

Eating the scones and some of the cake for tea tonight, we got round to discussing our earliest memories of getting involved with baking and cooking.   And I found myself remembering when I was very little (and that`s many, many years ago now!)  how when my Mum made pastry, she would always give me a little piece of it to roll out with my little rolling pin, then I had a tiny (I think it was a silver thimble) to use to cut out little rounds, and place on a tiny tart tin, then put a minute amount of jam in them and she would bake them.  When my Dad used to come home from work I used to give him the little tarts I`d made for his tea.   Only as I grew older did I discover that he didn`t really like jam tarts!

I wonder what any readers first memories are of cooking/baking?

What a difference a few bricks make.  My front garden wall and fence over the past months has been getting worse and worse.  Pieces of the fence were beginning to come loose and fall off, depite me trying to knock them back in, the bricks were flaking along the top.   So the time had come to do something about it. 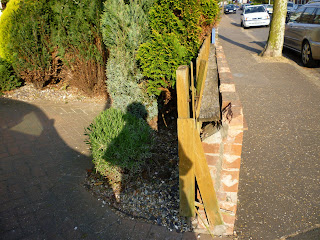 Having measured up the wall, I ventured into the unknown (the local builders merchants, feeling very unsure of myself) to buy some bricks and coping stones.  A very helpful salesman there helped find what I needed, and the materials were duly delivered.

Last week my special builder, Dave, arrived, and set to work to remove the fence, the old bricks and rebuild me a smart new wall with a pillar at the end to finish it off nicely.   What a difference it makes. 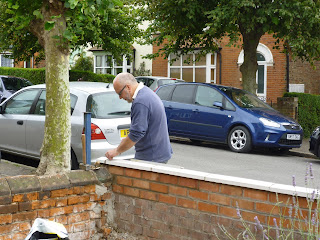 As I drove my car into the drive the next day, something seemed strange..... No, I didn`t drive into the wall !.....  I seemed to have a much wider entrance.   It`s not physically possible to be any bigger because the wall and pillar are in exactly the same place, but it does seem a bigger entrance, so it must somehow be an optical illusion.

I`m really pleased with the new look it gives as one comes along the road to my house too.   A job very well done. 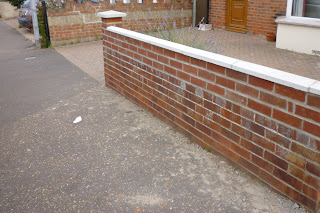 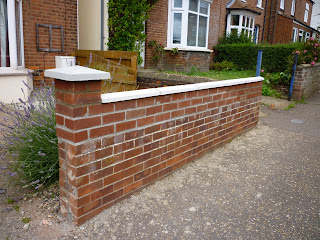