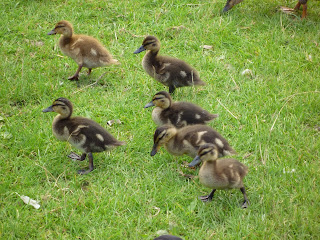 Aren`t they cute!
We went for a ride into the countryside to feed some ducks on a village pond last Sunday and found these sweet little ducklings. I just had to get my camera out!
Posted by Ivy at 9:13 am No comments:

I see, that somehow it`s over 14 days since I wrote a post.

Where has that time gone to? I didn`t realise it was so long.

I`ve been struggling over a bit of uncertainty in my working life during the last weeks, so maybe I`ve been so preoccupied with that, that I`d omitted to write on here.

The uncertainty is being caused by a combination of factors - the two partners I work for are halving the work of the business between them, so instead of work from 4 places coming into me at the Head office, only work from two outlets will now come to me; then, a new Sainsbury`s store is shortly to open a few doors away from where I work which will no doubt take some of our trade away, and that combined with the recession will mean that our Directors have to cut back on staff wages and hours.

The options given to me were to go back into the store cash office, the delicatessen counter (no way!!), or on to shop floor work for part of my contracted working hours, or to cut my hours, although, to be fair to P, he didn`t actually say that just hinted at it, but knew that I really needed to keep my 33 hours a week. But, as I hadn`t anyhere near enough work to fill all my hours in HO I had to decide what to do. I suggested that some of the store paperwork/computer work be transferred to me upstairs which would then relive the staff in the store, which P thought possible - but there still wouldn`t be enough to fill all my hours.

No way did I want to go back into the store. Now, don`t get me wrong, it wasn`t the Position that made me feel like that, it was simply that having done 37.5 years in the store, I just didn`t want to go back to it. I didn`t want the responsibility of the cash work again, and I certainly didn`t want to work in the shop because the taped music - or so called music, I call it a horrible din - absolutely puts me on edge and makes me very snappy, so I knew I couldn`t stick that every day for hours on end.

It was a real dilemna.

Which was more important - money or happiness?

On my request he worked out for me what my take-home wage would be if I cut my hours to 25 or 20 hours a week. I then worked out my average weekly household/living expenses, and came to the conclusion that I could manage on a bit less each week. It would mean saving less - but it would be worth it to be happy in my work.

I eventually made the decision, which P was happy with, and I start working 25 hours a week (still in HO, with the store paperwork coming up to me) in a fortnight`s time after I`ve had a weeks holiday.

Maybe then, my Blog will be written more regularly, as I`ll have more time!!
Posted by Ivy at 8:53 am 1 comment:

On my work each day I`ve been passing a little workman`s van. Nothing unusual in that you may think, but its the wording on the side which intrigues me and sents my imagination off.

Now that conjures up all kinds of pictures in my mind.... 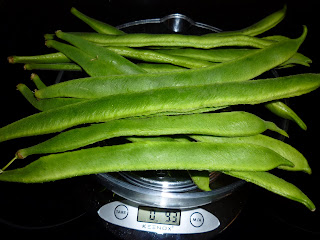 These last few days, I`ve been busy each day harvesting my crop of runner beans - my favourite vegetable, so I thought I`d share some with you here. Out of habit of what my Dad used to do, I weigh each picking. This was the first one, and as you can see there`s about 9 ounces, since then the quantity has increased each time, and yesterday I got over 2 pounds of them...... so..... it`s beans, beans, beans! 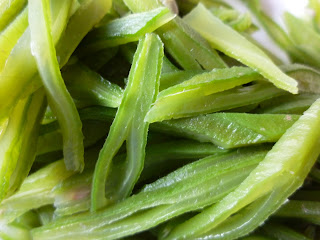 I did also plant carrot and beetroot seeds earlier in the year, but the weeds grew quicker than the seeds, so I couldn`t pull the weeds up when they were small, as they would have uprooted the baby vegetable seedlings at the same time -but now, I can`t find the rows of carrots and beetroot for all the weeds! I`ll just have to pull some handfuls of whatever is there and hope for the best!!

In the meantime I`ll continue to enjoy my piles of beans with melted butter on. (and a nearby neighbour has been enjoying some too, as I`ve passed some on to them). They really are delicious! 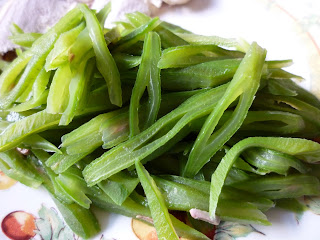 Today something will happen that will never happen again.

Take a look at the time at five minutes and six seconds after four o`clock today, the seventh of August and this year the time and date will be -

This will never happen again in our lifetime
Posted by Ivy at 10:28 pm No comments: 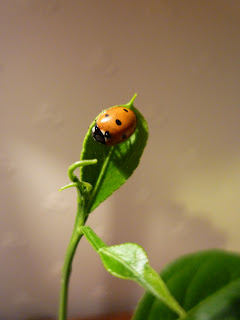 We`re still inundated with bishy barnabees here. As fast as I hoover one up indoors, another appears.

This one seems to have decided to go to sleep for the night on one of my lemon tree plants. He (or she!) kept nice and still while I moved the plant from the widow sill to a better place to photograph it. I think it was asleep. 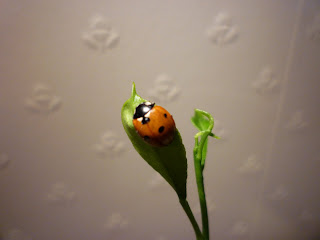 After a while of seeing (or feeling) the heat of a lamp I`d got on to try and illuminate it to get a better picture, it woke up, stretched and decided to walk over to the underside of the leaf where it was darker. So, I then had to turn the plant round and try again. 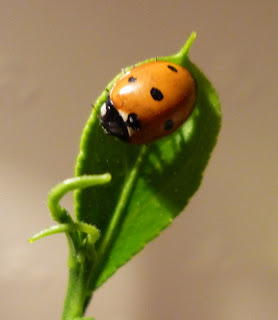 A few updates before I start on today`s proper post. 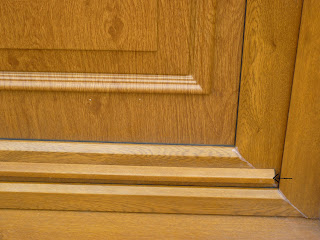 My door is fixed! The chap came yesterday as promised, and within a couple of minutes had solved the problem. Did I feel a bit stupid though when he showed me what the problem had been..... on the outside of the door towards the bottom was a decorative baton of wood and this had just moved along and was thus stopping the door shutting! (I`ve arrowed it on this picture) 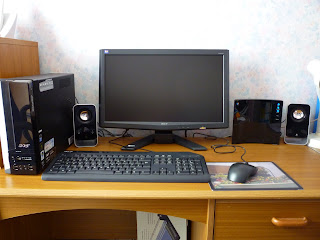 And here, especially for Lorna, is a picture of my new computer and monitor etc. and my (at the moment) tidy desktop!! I am hoping or maybe I should say aiming to keep my study/office room a lot tidier. I`ve started by going through the drawers in the desk and sorting out what is relevant to keep and binning the items which I no longer need.


And now - on to what`s been bugging me today - bishy barnabees.
Sitting having my breakfast this morning, I saw one of them climbing up the inside of my window, so I got a largish piece of paper, got it to walk onto that and put it out of the back door. Sitting down again, I spotted another one, so got the paper again, made it walk onto it, and took it out into the garden. A few minutes later I saw another on the wall, so repeated the procedure. A few minutes later, my eyes were drawn to a card on the mantlepiece as something was moving - yes, you`ve guess it - there was another one, so picking up the card I took it out into the garden to join the others.

Going outside to get in my car a short while later, I noticed that there were several flying round outside. And when I got to the town about 4 miles away, I discovered on getting out of the car that they were absolutely everywhere. Everywhere was red with them - houses, streets, .pavements, cars. ughhh. I quickly got what I needed from the shop, trying to dodge them landing on me as I walked along, and realised that there must be a huge swarm or even plague of them in our area.

Getting home, I discovered more in my living room. But now, instead of putting them outside, I decided I needed to be more drastic, so out came the hoover and each one I then found in the room found itself sucked up into my hoover. I was still puzzled though as to how they were getting in. That is, until I heard a "ping" on the hearth, and then I deduced that they must be falling down the chimney.

So, I just hope we get some heavy rain or wind to wash or blow them away!

*Bishy barnabee - the Norfolk word for a ladybird
Posted by Ivy at 9:42 pm 2 comments: