I had a strange experience last Thursday.   I got woken up at 5 a.m. with my front door bell ringing.  It alarmed me. I decided not to go down to the door and about 15 minutes later it rang again.   I still ignored it.   Then about 6 a.m. it went again, so I went into my office room which is at the front of the house and looked out of the window to the door, but couldn`t see anyone there, so back to bed.    A short time later it went yet again, so this time I thought I`d better go down, so I put my dressing gown on went down and looked out of the front room window.  No-one there and no one anywhere in sight in the road, no cars moving, nothing.
I decided there was one way to stop this, so I took the batteries out of the bell.
After breakfast I put the batteries back, and as I put them in the bell rang, and rang and rang - that`s it I thought, it wasn`t anyone at all, its the bell gone wrong.

Later that morning I went out to get in my car and the key wouldn`t open the car when I pressed it.  I tried different angles etc. but, no go.  Must be to do with the battery in that key I thought, so I got the other key to the car...... and the same thing happened, it wouldn`t open the door.   What to do?
So I rang my local garage, he talked me through how to take a part off of the passenger door handle, and then there was a place to put the key in.  That done, I had to get in  (well squeeze in as it was close against bushes in the driveway!) reach across and open the drivers door so that I could get in and then take the car over to them at the garage.  I tried that, but the door wouldn`t open from inside either.   It sounds like the battery he said, and told me to ring the AA or RAC.   I belong to the AA so rang them.
The AA chap arrived in about 30 minutes, got in put the key in the ignition and then opened the drivers door. .  Then tried it all again for me and found the same problem with opening it with the key. " Sounds as if its to do with the coding in the key to the car which will need to be reset", he said then he though and asked "Can I take it down the road and try it in the next road" he asked.   I agreed.  So he did, and within a few minutes was back. "It`s fine he said, there`s nothing wrong with the key or car".   He tried it again with my car back on the drive..... and.... it refused to open!
He explained that car keys work on radio waves, and asked if I had anything new around here that is interferring with the signal.  I couldn`t think of anything.  There was a police car parked just a short distance away and he wondered if it could be to do with the signal of their radio.   Then he spotted the light on on the door bell, and I said about the problem I`d had with that earlier in the morning - I think that`s the cause he said and went to examine the bell for me.   He discovered that rain water had got into the bell and was causing the sensor in the bell to stay on, and that was affecting the signal to the car key!  He took the bell off the door for me, and..... the car key worked fine!
So, I say - Well done to the AA man !
Posted by Ivy at 7:26 am 1 comment:

What an amazing time  we had last weekend at our church.


On the Friday afternoon a Team of 9 committed Christians, ordinary people of all ages, from all over the country came together to share a weekend with us.   And what a weekend that turned out to be.  Within a very short time, they became a part of us and it felt as if we`d always known them as our friends.  They came from the Lay Witness Movement.


The weekend started with one of many delicious shared meals over the three days.  (Three ladies from another of the churches on our Circuit and the son of one of them provided the catering, so that we could all share in the weekend, without the worry of cooking and washing up.)  The good food was accompanied by much  conversation and laughter which flowed around the tables as we got to know each other.


From the tables we moved into the church for the first of the four worship sessions over the weekend.  These were times when the Team members shared their testimonies with us, interspersed with times of prayer, and hymns, both old favourites and some new ones, all sung with a real depth of meaning to the words we were singing.


Times for group discussions were held within the worship time, and in peoples` homes on the Saturday morning, these were a real blessing to many as the Team and us all shared aspects of our lives and faith at a deep level.


The Testimonies the Team gave throughout the weekend, I don`t think could have failed to touch us all in some way, as they shared the way in which Jesus had become real to them and the way in which he was working in their lives.  Some of the testimonies brought tears to the eyes of many of us as they so openly talked of the way God was working in them.   They were a real inspiration to us, and really were “Sharing God`s love” with us.


I know that the whole weekend has challenged me and made me think about my faith, and I`m sure I`m not alone in that.   I don`t think any of us who were present at the times of worship, discussion groups, and the shared meals, could fail to be inspired by them to deepen our commitment to Christ.

Driving to work this morning - yes, I had to go to another location and not work at home today - I was out of the house by 7.30 a.m. and I am so glad I was - the sight of the morning sky as it became light and the sun came up was wonderful.


I am always fascinated to see, at this time of year, the trees against the skyline.  To see the shapes of the bare branches, the way they intertwine with one another all being part of the one plant. To me there is a real beauty about it, and especially so this morning when the sun was coming up, turning the sky behind them to all shades of apricot and orange, before the golden ball of the sun itself appeared.   It was awesome.

The forms of the trees today set me thinking of how we are rather like those trees, just one small branch or twig of it yet all dependent on the feeding and nutrients from the trunk - It made me think of God being the root and trunk of the tree and our lives, although interwined with each other and needing each other for support are yet all dependent on the care of God.
Posted by Ivy at 10:46 pm 1 comment:

I`ve been tossing up whether or not to make any New Year resolutions this year - I`ve done it before on here but, as I guess happens with so many of us, I haven`t manage to keep them for many weeks.

So, instead of making a whole list of them, I think this year, I`m just going to make a couple and see if its easier to keep two than a larger quantity.    Perhaps if I can make 2 a year and stick to them through the year I shall in the end achieve all from the list of previous years.

My resolutions therefore for this year are:

1.  To be more tidy in my house - ie. to put things away when I`ve finished with them, including filing mail as I open it, instead of piling it up to "deal with later".    (Later does come, but how much nicer the room looks when it`s done straight away!)

2.  To post more regularly on my blog, and to resume doing a daily  Counting Blessings Daily  in which I`ll endeavour to post something for which I thank God that day - it may be something seen, heard, something which has made me smile, a photo I`ve taken or.........   who knows!

It`s Two Thousand and Twelve already - where have those years gone since we were celebrating the Millennium? 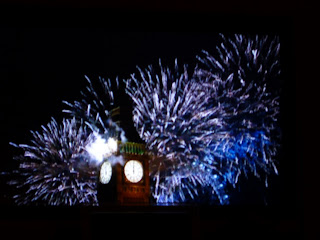 A
Happy New Year
to you All 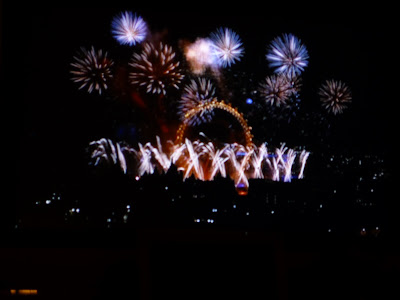