I`ve had a busy few days. I`ve been trying to catch up with all the jobs that haven`t got done in the last few weeks -

- like filing papers,
- catching up on housework, not the routine, but things one only does occasionally!
- sorting out my parents bedroom now that she`s no longer needing it. What a lot of items I binned from there!
- Shopping
- thinking of menu`s
- making things I`d promised people that I would
- posting off cheques etc...

I`ve got a friend coming to stay from tomorrow for a few days. The first time in my life that I`ve ever had anyone to stay. I`ve not been able to, for various reasons, so now that I`ve the house to myself I can. I`m looking forward to seeing her. No doubt it will call for some late nights as we sit and chat and catch up on all each others news!

After a good day on that Friday, we had a shock and upset on the Saturday evening. My Mum`s man-friend (can`t say boy friend at that age) didn`t go to see her as she epected on the Saturday afternoon. So after she`d made numerous phone calls to his and got no answer, I went round to see if there were any lights on at his in the evening. There weren`t.

Thankfully I didn`t have a key. So I rang the bell of the person the in flat above as I knew them, and luckily they were there (their`s is only a holiday type flat), they came down, but they didn`t have a key either. So he went and got a big torch from his garage to look through the windows. Looking through he could see that Mum`s friend was lying dead on the floor. So that was a shock. Then I had to go and phone my parent and tell her. Surprisingly she seemed as is she expected to hear that and didn`t burst into tears at the time.

In a way, it`s a relief to me that it happened the way it did for him. It would have been so much worse if he`d had had an accident on the way to or from Mum`s, or been at hers. And, to be honest it`s something I`ve always dreaded would happen if he was here or with me in the car, as he was quite elderly.

Although I liked him as a person, I have always resented the way Mum seemed to be putting him in my Dad`s place. And no-one could replace my Dad. So I`ve not shed any tears over this, at the moment, and I don`t think I will.
Posted by Ivy at 6:57 am 2 comments:

A Sunny day off

It was my day off work yesterday, and surprisingly the sun shone all day.

I went to get myself a piece of fresh fish from the fishmonger to cook for my dinner. Looking at the display of fish in the fishmongers window I spotted that they had got some of my favourites - Dover Soles, they looked very fresh and enticing. Knowing that my Mother also enjoyed them, I bought two, then rang her up to say I would pick her up and bring her home for lunch. That pleased her!

I had intended taking her shopping in the afternoon to a supermarket, but the sun was so inviting to be outside that it seemed that it would be a waste of a beautiful day to do that, so instead, driving to a car-park in our town, I got out the wheelchair and pushed her round some of the older narrow streets and to sit and look out at the sea. We couldn`t get down onto the promenade because there were far too many steep hills and slopes to tackle. But at least we could sit on the top and look down. And, have an ice-cream!

Later in the afternoon we then went back into the town and did her shopping in some of the shops there before I took her back to her home for tea.

A really good day - unplanned. I think things done on the spur of the moment are often more enjoyable than the planned!
Posted by Ivy at 8:56 am 3 comments: 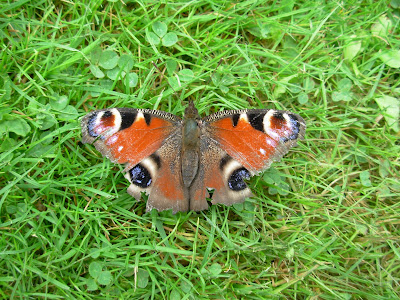 As I may have said on my blog before, I don`t like creepy-crawlies, and especially not spiders. This is the time of year when there seem a lot of webs on the shrubs and bushes in the garden. I appreciate the beauty of them, especially when the dew is on them first thing in the morning and they shine in the sunlight, but I don`t like the creatures that make them.

There is one particularly large one across the outside (thankfully the outside, and not the inside!!) of the window near my dining table. Whist I was having my lunch today I became aware of something large flapping near the window. At first i thought it was a leaf blown into the web, then I realised it was a butterfly.

After watching it for a while, I saw that it wasn`t managing to get out of the web, and the spider hadn`t appeared. I couldn`t bear to see it struggling there any longer, so knew I had to go on rescue mission! Not that I`m particularly fond of being near butterflies either but I couldn`t bear seeing it suffer, so out I went with a small piece of stick and managed to get it out of the web and onto the stick... but then, I couldn`t get it off the stick. It still seemed to be stuck by some of the stickiness from the web, although it was vigorously flapping its wings, so with the aid of a second twig I eventually managed to get it off onto the grass.

As it sat(?) laid(?) there on the grass I saw how beautiful it was, so came and got my camera to take these photos to share with you all. What kind of butterfly is it, I don`t know..... but perhaps someone does.
Posted by Ivy at 10:16 pm 2 comments: 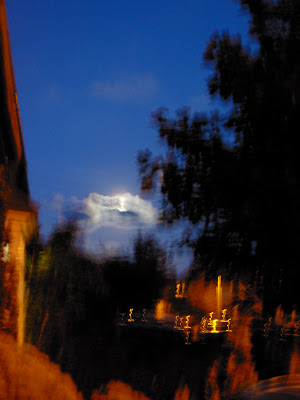 Driving back the other evening after visiting my parent I was enchanted by the view of the full moon. It was so huge and bright in the sky ahead of my all of my journey. So arriving home I dashed in doors to grab my camera before it disappered from view behind a cloud.

Here are the results of my pictures, they aren`t as good as I hoped, but on looking at the one above, I thought it looked almost as if it could be a painting and I quite liked the fuzzy effect so thought I`d share it. 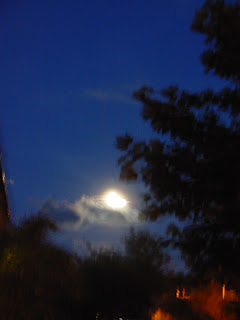 I was sitting in our church service on Sunday evening for a special service, when the Town Mayor got up to speak to welcome a new Minister.

He (the Mayor) started by saying that he was going to tell us a little of his background. Not very interesting I thought!! but how wrong could I be!

He went on to say that he had very strong memories of being taught by Mr.Xxxx xxxx in the boys class in the old chapel (the one before the current church was built). And how the influence of the nature and teaching of that gentleman had stayed with him all his life.

That teacher, was my Dad.

It was so lovely to hear someone remember and speak about my Dad, someone that I didn`t even know had known my Dad, and even more so because of the sincere way he thought of and spoke of him.

It was a truly Special Moment
Posted by Ivy at 6:50 am 3 comments: 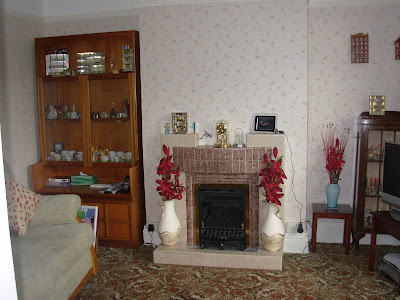 I don`t know what my decorator friend did - he seems to have pushed the walls out somehow! The room seems and feels twice as big as it did before.

I`ve just got one thing left to do, and that is to decide what, if anything, to hang on the wall above the fire place. We used to have a mirror there. I`m not hanging that one back, as it`s beginning to look `worse for wear`, but can`t decide whether to go for another mirror, or a picture, or to have one of my photo`s blown up to picture size, or to leave the wall blank! Decisions... decisions!!
And, I think I`ll in a few months or so change the carpet too, I`ve never been really keen on it ever since we had it years ago.
Posted by Ivy at 10:17 pm 3 comments: 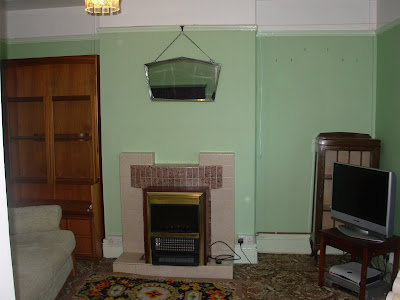 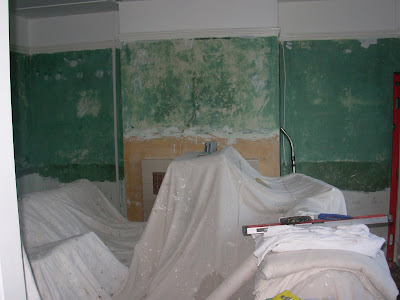 I know some people might call them rodents and nuisances, but I love to see them... what am I talking about - squirrels.

Outside my parents window is a tree, so we decided to hang some peanuts, fat balls and seeds out for the birds. They hadn`t been hanging there long, when a squirrel appeared. 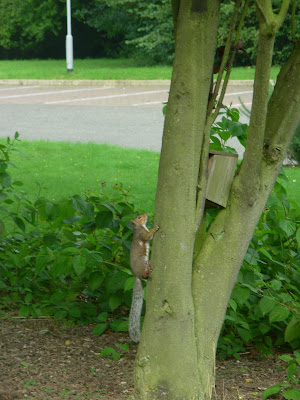 .
Now, how people can call animals dumb creatures, I don`t know. This little chap (or maybe chapess!!) soon worked out a way to get to the fare it wanted. We watched with interest as it climbed the tree, then seemed to look and think out which way to go about getting into the container of peanuts. Very quickly it decided that the only way was to reach out, hanging on by the very tips of its rear legs and it`s tail, while it stretched across to feed. 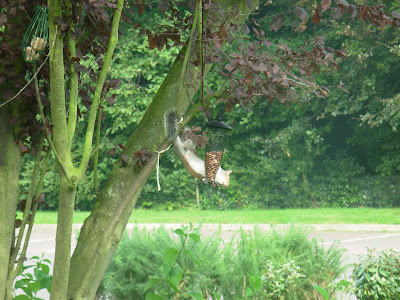 Then, getting a nut out of the wire container, it hung there upside down to eat it. before repeating the operation many more times. 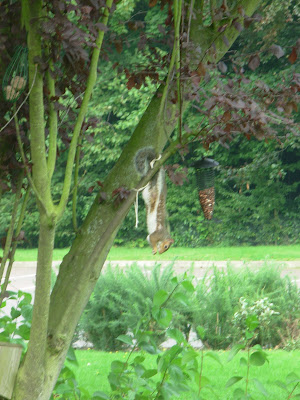 It wasn`t long before another one joined him, this one though decided to go for the wild bird seed, 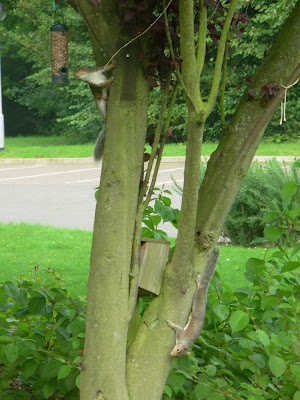 After a short while of trying to find out how to eat what he could see, but which was behind plastic, he found the small hole at the bottom where the seed comes out, and put his two front paws (are they paws in a squirrel?) pulled the container to him and got his head into the hole and ate the seed.


What wonderful clever creatures!
Posted by Ivy at 9:29 pm 1 comment: