Following a very windy and wet Bank Holiday weekend, the sun came out today and it was so beautiful that it enticed me to leave my work (I had done my allocated hours), and leave the housework and go out.    So, I jumped into the car, drove a couple of miles along the coast and then went for a walk along the cliff top. 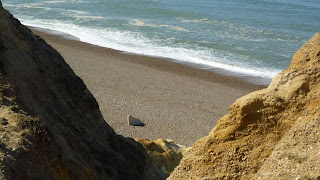 It was beautiful.   The sky was blue and so was the sea.  I tried to capture all the wonderful colours and shade of blue in the sea, with my camera, but it doesn`t really do it justice. 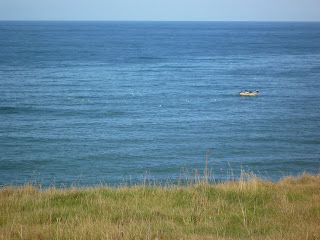 What will the neighbours think?

I`ve just realised, I`ve had, and got different men coming to my house every day this week!   I`m not talking about the outside workmen, because they`ve all gone.   These have all come to the front door and I`ve let them in.

First, on Monday, it was my boss - because now I`m working from home he comes up for various things.

Then on Tuesday, first a visit from my boss at 7 a.m.!   and then an Accountant about 9 a.m. who stayed the day.

Wednesday saw another man on the door step - this time the washing machine repair man, because my machine refused to work

Tomorrow I`ve a friend who should be coming

As to Saturday - that remains unknown at present

And on Sunday, I`m entertaining a visiting Minister to lunch.

What will the neighbours think of all these men coming and going from my house???!
Posted by Ivy at 7:10 am 1 comment:

I`ve been so busy over the past days since my last post, that I haven`t had time to write anything.

So, an update - The scaffolding came down off my house one day last week, so I now have what looks in one sense to be living in a new house!   - well from the sides and back views, the front we have kept the same bricks as before, and just had pointed up where necessary, so I`m glad about that.    I don`t think I`d like to change the traditional look of the front.

I`ve now been working from home for a fortnight and it`s lovely!    I looked out of the window the other morning at the time I should have been setting out for my office and it was pouring with rain.  What a pleasure it was to just be able to go upstairs to my office here and not have to get umbrella and rainccoat out and venture out into it.  All I need to do is to get things sorted out as to the best layout for working in the room, but that will come with working there and finding out as I go, what works best where.


Today is Sea Sunday at our church, and it was my week to do the flower arrangement, so yesterday I spent several hours doing that.    Here is the result of my main arrangement. 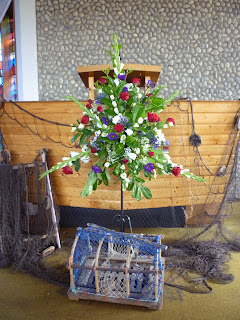 My house is undergoing a facelift at present. It was built around 1900, as far as I know. (I`m thinking of trying to find the actual history of it) It was, so I`m told the first one to be built in this road, and is the only one which was a detached house the ones which followed it were all semi-detached.

Being built over 100 years ago, of a softer type of brick and a sandyier mortar I suppose its no wonder that the bricks have been eroded away with the winds, the salt air and the weather. As for the mortar between the bricks, it had got so that you could run your finger along it and it would just crumble out.   Infact at times, sitting indoors at night you would occasionally hear pieces falling down in the cavity wall. 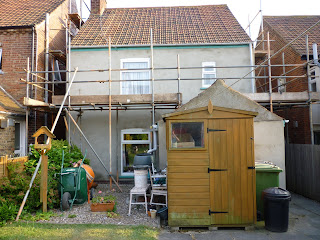 So, although preserving the bricks on the front with pointing up, as the weather hasn`t attacked them so badly, the gable ends and sides have now had a coat of cement (or whatever you call what they put on them), and then it`s going to be painted with a weatherproof paint - so a new look!

Yes, expensive, but worth it.
Posted by Ivy at 7:32 pm No comments:

I started a new phrase of my working life yesterday.

I`ve worked in the same business and building for just over forty years.  During that time, I have ofcourse seen lots of changes, both to the actual physical structure of the building, its frontage, door, inside layout etc have been changed numerous times.   When I started there, the first and second floor of it were a `house` and the manager lived there, coming down stairs straight into the store.  Later the stairs were closed up and made to enter from the main street to access the upper floors.  Then, for years and years the upper rooms were left empty.

After many years of being disused, and with a change of ownership of the business the rooms became the head office, and I moved up there to work.

Now, the rooms have been converted back into living accommodation and made into two flats.  That meant the office I work in needed to be re-located.

An office was made for me in the warehouse - disused warehouse (I should add) of another of the company`s stores.  I went over to look at it a few weeks ago, and as soon as I walked up the stairs to it I experienced a very strange feeling - I just totally felt very uncomfortable there, it felt somehow very spooky.   I just knew that I just couldn`t work there.  My boss, who was with me, took one look at me as said "you don`t like it, do you?"  and I had to admit I didn`t.     He was very good about it, and didn`t say - well this it you`ll have to get used to it, he instead said we`ll have to see what else we can find or do.

So, yesterday began the new session of my working life - as I am now working from home, and just using that "spooky office" for a base for mail, storing paperwork etc....   Last week we moved all the office items which I needed to here, and yesterday I started actually working here.     And it was a good day!
Posted by Ivy at 7:06 am 2 comments: