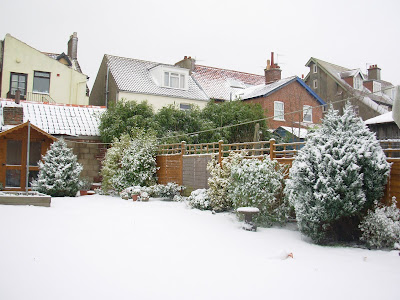 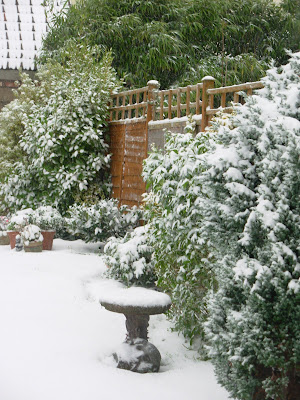 It looks as if I`m going to have a white birthday, tomorrow, instead of a white Christmas!

Or, as I asked a few days ago, have we skipped a moth and this really is December? 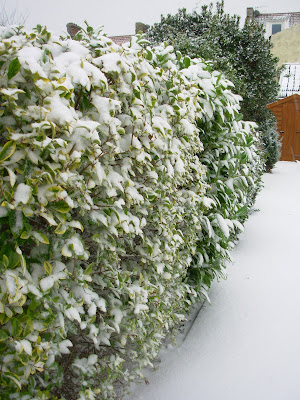 This was the scene in my back garden an hour ago, after it had been snowing constantly since I got up this morning.

Pretty isn`t it? But I wonder where all the poor little birds have managed to get to keep warm and dry out of it? 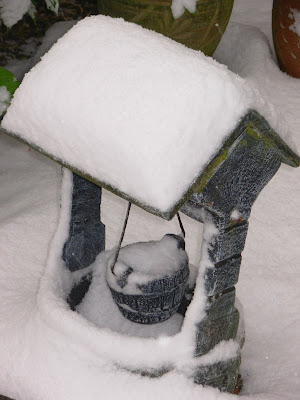 Since Monday, I`ve had a bit of a pain in my left side and my chest, but last night in bed, it got really bad. I couldn`t lay on my side, my front, nor very comfortably on my back. I nearly got up to write this at 2 a.m. this morning but daren`t move. I lay there, thinking: did I ought to ring someone?, should I ring for a medic? is it my heart? is it cancer? is it just a muscle?

My first job this morning, as soon as the surgery opens will be to go and make an appointment to see the doctor and try and find out what it it - although I`m scared of what he might say it is.

UPDATE
Going into our Health Centre as soon as they opened at 8 a.m. the receptionist was very helpful, and said there were 2 emergency doctors on duty and that one of them would ring me in the next couple of hours. So home I went.

About half an hour later the phone rang - it was the doctor. After trying to describe where the pain was, etc., he assured me he didn`t think it was anything too serious and nothing for me to worry about, but would I like to go up and he would check it out. Appointment made for 9.10 a.m.

I duly went up, saw the doctor chap, he did several tests and examinations, and is fairly sure that the pain is coming from my somehow damaging the muscle around my ribs. How I`ve done it, I don`t know. Still at least it`s none of the life-threatening things I was fearing. Painkillers were prescribed, and I`m told it could take at least 2 weeks to clear.
Posted by Ivy at 7:07 am 1 comment: 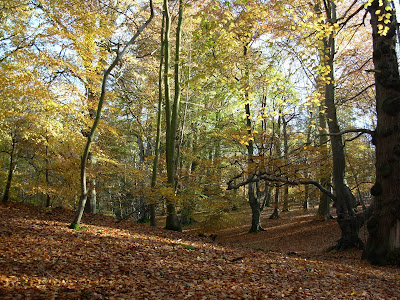 I`d always thought of spring as my favourite time of year, with the new growth and fresh green everywhere, but this year the wonderful colours of the autumn trees is making me really appreciate and enjoy the autumn too. 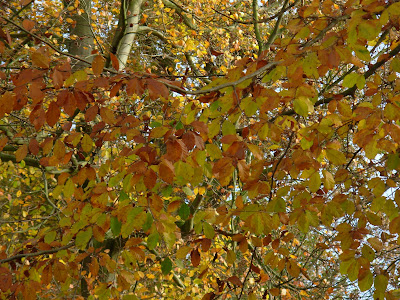 Both on the trees and on the ground! 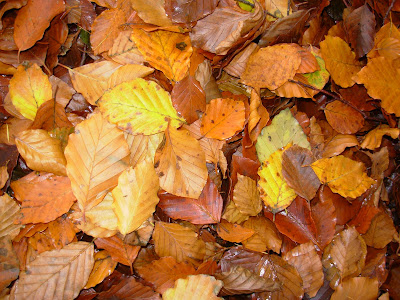 Today, for the first time in weeks and weeks - no longer than that, months and months, I didn`t go to church. Yet, today I experienced a time of worship, that was very touching.

Let me expand on that.

I didn`t even get up until later than normal this morning, because I`d agreed to go over and have Sunday Lunch with my Mum in the care place she is at, because they were having a visit this afternoon by a visiting Young Peoples Salvation Army band.

Knowing that our morning service wouldn`t finish in time to enable me to do that, I decided not to go. So I spent a bit of time at home, trying out playing a few hymns on the piano before setting out for Mums. The Sunday Lunch, (served in her room) was very good - roast pork and all the trimmings, followed by a delicious chocolate trifle.

I then pushed her into the Communial Room where the Band were to play. There was a few other residents there when we arrived, and Mum soon transferred from her wheelchair into one of the easy chairs, and I had one beside her. As we sat there, more and more residents gradually made their way into the room, and all the seats began to be taken. I then gave my seat up to another lady, and sat the other side of the room to the side of where the band were to be.

The local Salvation Army captain, (who I knew) and one or two other officers from the local corps came with the youngsters of the band, and the afternoon started. Hymn sheets were given out to everyone, so that we could join in singing. We sang about 6 or 7 different hymns, listened to a reading and a very good short talk on the reading and the afternoon concluded with a prayer.

That may not sound `out of the ordinary`, but to me, from where I was sitting, I could see all the residents, and just to see the way they knew the hymns and were joining in singing along with them, and the look on the faces of some of them as they did so, was so moving, somehow. And so inspiring to see the youngsters aged from 9 upwards, really committed to the band.

And, in that room with that group of people, I really felt a sense of God`s presence there with us. It was a unique time. During the prayer, I for some unknown reason, felt tears come to my eyes. Not tears of sadness or distress, but of being somehow deeply moved by just being there.

So, although I didn`t go to church today, I found a real place and time of worship.
Posted by Ivy at 7:42 pm 3 comments:

Today IS the 15th. November, isn`t it? Or have I lost a month somewhere?

...opening my mail, brought by the postman a few hours ago, I find my first Christmas card! I couldn`t believe it.

And, no, it didn`t come from abroad, it came from someone in a village about 6 miles away from here!

I`ve not even had my birthday yet, that`s still 9 days away. I definitely don`t expect to receive Christmas cards, before I`ve received Birthday cards. (That`s of course assuming I`ll get some birthday cards!)

So, what am I going to do with the Christmas card? - stick it in a drawer until a lot nearer the time, I`m certainly not going to stand it on the mantlepiece yet, it would look ridiculous so early.
Posted by Ivy at 12:10 pm 4 comments: 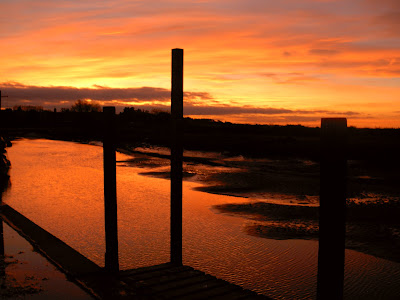 It was such a beautiful sunset this evening, that even the water at this beauty spot turned orange! Isn`t it a beautiful world we live in.
Posted by Ivy at 10:24 pm 3 comments: 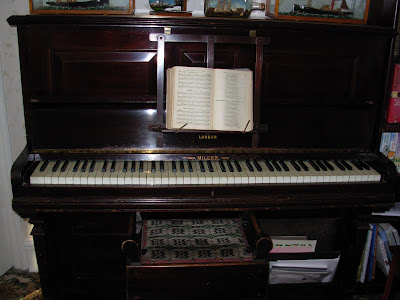 I felt strongly urged somehow to rekindle my efforts of piano playing.

My earliest memories of first touching the keys on a piano, the same one as still stands in my room, go back many years to when I must have been about 5 or 6. My Mum used to sit and play hymns on the piano, and as a little child I wanted to have a go too, so she used to show me one note on the keyboard and each time she had to play that note, would say "now", and I would hit the note my finger was on (an octave higher than she was playing). I realise now how hard it must have been for her to play and keep saying "now" every time it was that note. And then as I got a bit older she would show me the one note on the line of music and I began to recognise it and so, when to hit it.

Anyway, from there I went on later, I suppose from the age of about 8 - 10 or round about then to have piano lessons at the home of one of my school teachers after school. How well I remember that house - it always smelt strongly of boiled fish! (The teacher had lots of cats, and cooked fish for them.)

As I got older, I did less and less practice and playing and eventually none. How I wish now that I had kept it up.

Sitting down at the piano the other day, I found that I can still read to some degree the right hand music, and so long as I know, in my mind, how it should go, I can make a fair stab at playing an easy hymn tune or two. As for the base notes of the left hand.... that will need a great lot of practice! But now that I`ve the house to myself, I really think I will try and master playing it again and particularly getting the left hand for the base notes working again. There`ll be no one to hear all the awful discordant sounds that come from the instrument whilst I do so, so I shan`t feel self-conscious trying them out.

I`ve been magnetically drawn over the last few days, towards something in this room, something that I`ve not touched for years (other than to dust it)! But, since having the room decorated and decluttered of furniture, so that I don`t need to move anything to get to it, it`s been beckoning me for days.

I`ve sat here tonight, with work I should be doing, but the thing I can see out of the corner of my eye, keeps somehow trying to draw me to it. Could I still do it, I wondered? Dare I try? At least there`s no-one else in the house to know if I make a mess of it and fail.

I got up, and went over to it. Lifted the lid. Picked a book up. Sat down. Thumbed through the book. Set the book on the stand. Then, tentatively with my right hand touched it.

In fact, I became so engrossed in it, that looking at the clock expecting to see I`d been there about 10 minutes, I discovered that over an hour passed! And, I`d actually enjoyed it.

So, I`m feeling quite pleased with myself this evening.