For the first time, I was asked to take part in a Flower Festival at a village church.   I was nervous about doing it somewhere else, but as the Organiser always does one for the Festival I help organise, I decided to accept.   This is the arrangement I did for the subject "A day in the life of..... a Stained glass worker". 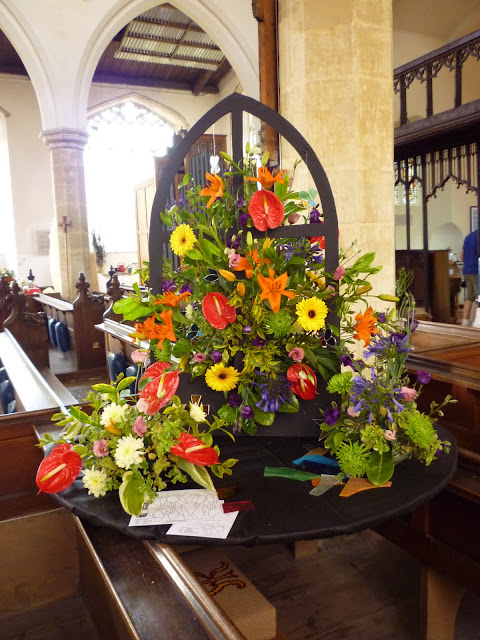 The Festival is at Upper Sheringham parish church this weekend.
Posted by Ivy at 1:49 pm 2 comments:

I`ve been enjoying the beauty of a part of our coastline this afternoon. The sun drew me out, to leave all the housework and jobs I should be doing indoors, and to take a drive along the coast and have a walk. 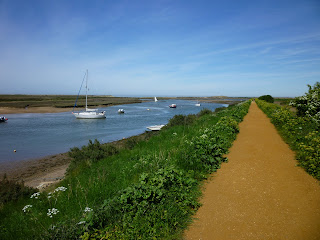 Although I passed a few people also enjoying the lovely afternoon, it was really peaceful and quiet and just what I needed after the worries of last week. 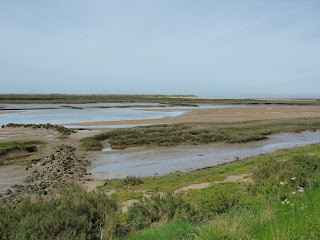 The air was filled with the sounds of birds calling and singing.  In the stream to my right as I stood looking around me, I spotted a coot with two tiny new chicks, beyond that in the meadow a pair of geese walked along with young goslings in a line behind one parent bird with the other parent bird at the back of them. 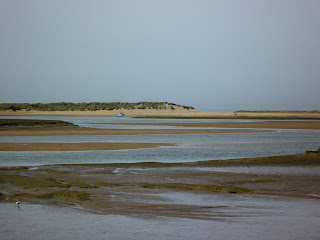 And this, just a fraction of the panoramic scene, just has to be so beautiful.  Our land really does have wonderful places to walk and experience.
Posted by Ivy at 10:22 pm 2 comments:

I was at a loss for what to say yesterday.   Not that I`m a talkative person at anytime, and I think that goes back to my upbringing as a child - but I digress, that`s another subject altogether which maybe I`ll write about another day

What happened was my boss brought a young man into the office with him and after introducing him the young man went off to do some work in another part of the building.   J, my boss, then told me that the young man`s daughter, aged just 8 months old, had died a few days ago and naturally the lad was very, very distressed.

After a while J suddenly said to me "You believe in God, don`t you?",  to which I replied "Yes",  (It was the first time that anyone had ever openly asked me that)  and I knew somehow that he was thinking about that baby and the lad, and asking `why`.   I just didn`t know what to say.   All I could come out with, is  "there is a lot that happens that we just don`t understand, but I believe there is a purpose behind all that happens even though we can`t see it, and may never understand it"

I felt very inadequate, and don`t know if that was really a good enough answer to give.

I feel very challenged by his question. - not in the sense of challenging God, but in how deep my faith is.   I feel I should have given a better answer than just those few words.
Posted by Ivy at 7:04 am 2 comments:

It wasn`t my day yesterday!

The morning started nice and bright although breezy, so I hung my washing out on the line.   It was getting nice and dry by lunch time, but needed just a little longer.  I needed to go somewhere, so off I went in the car.  By the time I came back a couple of hours later it had been raining, and my washing was now wetter than when I put it out!

Now, I`m in pain.  I went through to the kitchen to make myself a supper drink yesterday evening, and turning to do something in the living room on my way, somehow my slipper seemed to grip to the carpet as I turned back and..... down I went, hitting my side on the corner of a dining chair, and my hip on the floor.  Thankfully I was on the carpet and not the tiled kitchen floor.   But now I`m in pain whenever I move.  I guess it`s just bruises and maybe strained a muscle there, but ouch!   I`ve got to stop and think now before I stretch to pick something up or reach out to the right and try and find a different way to move to do whatever it is I`m trying to do to lesssen it hurting.  How frustrating.
Posted by Ivy at 7:59 am 1 comment:

The sun shone, I was on holiday from work, so into the car I jumped yesterday morning and set off along the coast road, enjoying the beauty of all the new spring life around me.   The wonderful green of the trees, the pink blossom on the almond and cherry trees, the sight of lambs in a field.    What could be more beautiful.

Stopping in a town to get myself some fish & chips for dinner, I then drove along the cliff top found a good spot to park overlooking the sea and enjoy the fish & chips.   Sitting there in the car eating them, I became aware that two ducks had waddled over and stood there watching me.  I decided to see if they liked chips!, so threw two small ones out of the window, which they soon devoured.   They stood waiting for more!   (which they duly got)   but I discovered that they don`t like fish skin - I threw a little battered covered bit of skin out to them, they looked at it and ignored it. - not so the sea-gulls, they quickly came for it. 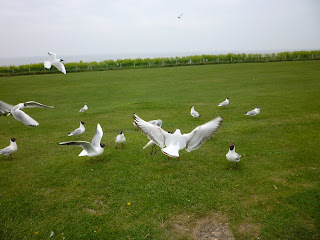 Having finished my picnic lunch I went for a walk along the cliff top. 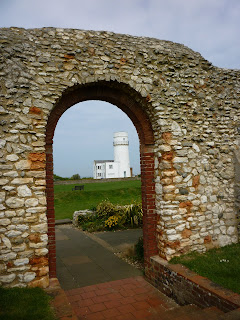 This is the beautiful scene that I was looking at as I walked along.   The picture doesn`t really do it justice - it was such a huge open, calm, peaceful, expanse of sea and seashore. 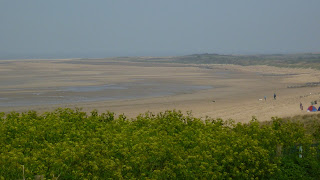 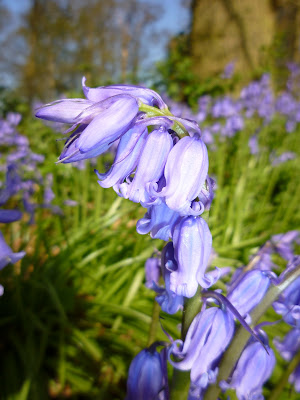 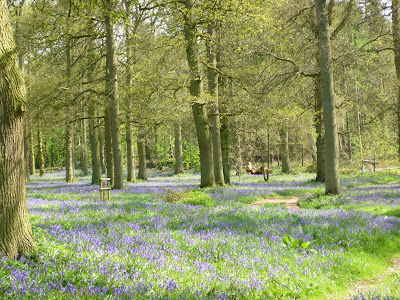 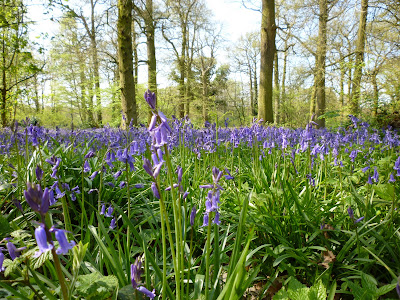